Nonfiction, Fiction, and Stranger than Fiction

Today’s 3 Books, 3 Blogs is a guest post from Angela over at You Are Awesome.

I am heading down to London today for a damn fine cup of coffee at The Twin Peaks Festival.

Thanks to Angela, and enjoy!

Nonfiction, Fiction, and Stranger than Fiction
by Angela Noel

I love books. I love blogs. I love Lorna. Gin & Lemonade perfectly describes the tone of Lorna’s blog. Her Gin & Lemonade is the fusion of sweet picnics in sunshine with children, pets, and people whose names you’ll only remember if they’re wearing nametags, with the bite of hard liquor you know you shouldn’t love quite as much as you do. Thus, doing a 3 blogs, 3 books post for Lorna’s blog offers a unique opportunity to celebrate things I love. But, not be too over-the-top about it because, frankly, Lorna would hate that.

I get a little obsessed with non-fiction every now and again. A dude at work, who I happen to think is a wonderful example of what’s going right with millennials, kept telling me that calories don’t matter. When donuts would appear in the cubicle next to me, I’d moan about my inability to resist them, and he would say, “But, Angela, calories don’t matter.” So I challenged him to a dual. No, I didn’t. But I did say something like, “Prove it.” And he handed me this book called The Calorie Myth by Jonathan Bailor.

I started reading it because I couldn’t wait to tell Danny (that’s my co-worker’s name) he’s full of it and this book was a terrible example of the worst kind of science. But, the more I read the more I thought, “Oh, crap. This stuff makes sense.” Cut to two weeks later and every minute of the day I’m telling people little vignettes I learned from the book, thoroughly annoying everyone. Now that might not sound like a ringing endorsement. But, if eating more overall food, and cutting down workout time to twenty minutes A WEEK appeals to you, this is one heck of a book. I don’t plan on becoming a Jonathon Bailor groupie or anything. But, I definitely got more out of it than I thought I would. Well-played, millennial. You win.

Aside from my forays into non-fiction fitness, I’ve also recently read The Chaperone by Laura Moriarty. It’s a bit older, published in 2012. But the themes play perfectly in today’s environment. A buttoned-up matron, Cora, takes a free-spirited but damaged teen to New York during the tumultuous Prohibition years. While there, Cora starts to see the world through a different lens. She’s exposed to people and things she didn’t know existed. As a result, she finds a way to navigate the judgment-ridden world she’s always known to champion a better way. Cora’s evolution is quiet, but profound. For fans of historical fiction, this one doesn’t disappoint.

Now back to non-fiction, this time a collection of essays. I wouldn’t have picked up this book a year ago. I would have been afraid to. I know that sounds dumb, but it’s true. Like Cora, I feared to have my world expanded. Many of us do.

Recently, I heard someone say reading diverse authors can be a radical act of empathy. When I picked up, It’s a Good Time for the Truth: Race in Minnesota edited by Sun Yung Shin, I didn’t know what to expect. Inside, I found the kind of eye-opening beauty one finds while travelling far from home. It’s uncomfortable. It’s sometimes heartbreaking. It’s real. The authors articulate experiences vastly different than my own. They do not blame, they do not rage. They are storytellers, telling their stories.

I met one of the authors in an accidental way. The final essay in the book is about the connection Native Americans have to not only the land, but also the food the land produces. Passionate about seeds, Diane Wilson writes about the alienation of the Dakota people through the simple act of forcing Native people to eat an American diet. Her words are both beautiful and compelling. At a recent conference I attended, I gushed about this essay I had read about seeds and the Native diet to a fellow attendee. I told the stately, white-haired woman I couldn’t remember the name of the author. Realizing the book was on sale at the conference, I asked her to hold on while I checked for the author’s name. When I returned to the conversation a moment later, it dawned on me: I’d been talking to the author. My cheeks reddened, but she smiled.

Even if you’re not from Minnesota, or even the US, this collection of essays is a worthy read.

Let’s talk about blogs now. Please note I love so many. Talking about only three is painful. So, I’m going with a theme: funny in my favorite kind of way.

Since I started on fitness, I think it’s only fair and right that I talk about Fatty McCupcakes. What I love about this girl is legion. She’s funny, fearless, and not afraid of the f-bomb. (Which I like reading, but don’t like writing. I know. I’m a little nerdy in that respect. Ah well, we all have our things.) I love cupcakes. I love reading about how much Katie loves her cupcakes. Basically, this girl doesn’t take life too seriously. And sometimes that’s exactly what I need to read.

Alice, from Lutheranliar Looks at Life, has lived. From the Midwest to the East Coast, she’s had a career, a family, and a whole lot of experiences I can barely begin to comprehend. Steve Martin? Check. A rubber chicken? Check. Naked boss? Check. Her posts brim with heart, and never fail to make me smile. She’s telling it like it is, as it happened, but manages to make truth much more hilarious than most fiction I’ve read. When some of us have bad days, we go home and have a glass of wine and whine about it. When Alice has a bad day, I imagine her laughing (and maybe drinking wine, too). More, please, Alice. You’re my kind of people.

And last but not least, I must recommend Traci York’s amazing journey with Lumpy and Leaky. Who can make a breast cancer concern funny? Traci can. Few things are as scary as cancer. Some people, understandably, would keep these kinds of life dramas private. But Traci decided the best way to deal with this kind of crap (and that’s what cancer is—total crap) with a decidedly candid and often hilarious series on her blog. I hate that she had all the worry and waiting, but I love that she showed a whole lot of other people like me, that fear multiplies in quiet places, but dissipates in the sun. It sounds like Traci’s going to be just fine. But the gift of her openness during times of crises will mean we could laugh and cheer (and worry) along with her. It’s these things that connect us—these human experiences.

Laughter through tears, is there anything better?

The answer to that question is, yes, or at least, maybe. There is one thing that might be better. I’ll set the scene for you: I’m sipping lemonade with a splash of gin on a summer’s day in the park when a very attractive person, running fast and in a beautiful well-coordinated workout outfit, trips on a tree root right in front of me, the person smiles sheepishly saying, “Let’s both forget that just happened.” And I raise my glass to him or her and say, “Cheers. Been there. Done that.” He or she keeps running. I keep sipping. The sun keeps shining. We both keep smiling.

The Five Stages Of NaNoWriMo Regret 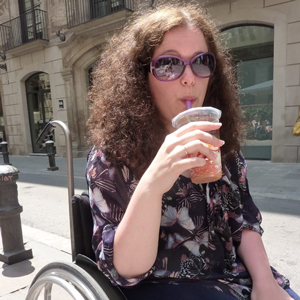